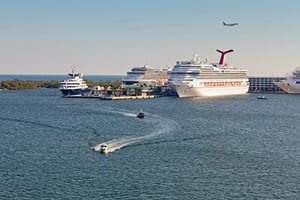 If you suffered a severe injury at Port Everglades in Broward County, then you should call the Port Everglades accident attorneys at the Wolfson Law Firm. We have helped victims of negligence and intentional acts in Florida since 1963 and we can help you too. Just call us at (305) 285-1115 for your free consultation.

Port Everglades is the home base of Oasis of the Seas, one of the world’s largest cruise ship, and her sister ship Allure of the Seas. Back in 2003, it hosted a record fifteen cruise ships, in times when the closest competitor, the seaport of Barcelona, hosted only nine. Regarding cargo traffic, it is the main seaport for importing alternative fuels, jet fuels, and gasoline. Port Everglades is also recognized as a favorite United States Navy liberty port.

It has a huge positive impact on the local economy. In the small Broward County, it creates an economic impact of billions of dollars annually and employs, directly or indirectly, more than 100,000 people throughout Florida.

Accidents happen all the time in busy ports such as Port Everglades. With so many passengers and so much cargo passing through it, it’s hard to keep the place safe all of the time. You can suffer personal injury there due to many various reasons, but chances are that it could be caused by some of the most common ones:

Port Everglades may be liable for personal injuries under the Florida liability laws depending on the facts of the accident. The port is supposed to reasonably secure a safe environment for visitors. Failing to meet the standards due to negligence can make Port Everglades liable for your injuries suffered on premises under its control. Damages can include medical bills, lost wages, compensation for pain and suffering, loss of enjoyment in life depending on the case.