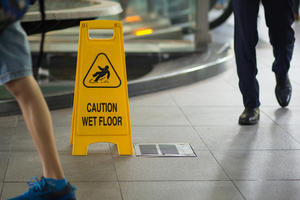 Disastrous accidents happen every day, and you can find them if you look hard enough. Car accidents, trip, and fall accidents, medical malpractice, and work accidents that leave many crippled and with piles of medical bills. One of the more significant accidents causes that many American and Floridians face is called a slip and fall. Slip and fall accidents fall under what is called premises liability. This means that when you step into a public or private area, be it owned by the government or by a private company, and they make a promise to you. This promise is one of reasonable safety and security, one that ensures that you will be safe from any events that would leave you harmed or in any form of pain. When you end up in a slip and fall, due to slippery floors, the negligence of another employee, bad lighting, or any other assortments of hazards, then that promise has been broken. When that promise is broken, that means that legal counsel may be required, and compensation may be pursued.

When an event like this occurs, you must know where to turn to. That is where the Wolfson Law Firm comes in, as they've been in service to the good people of Cooper City and Broward County for decades, and they're willing to help you as well. Therefore, the Wolfson Law Firm makes sure to extend as far as it can across the various cities of South Florida and beyond. This way, they know that they have someone in Fort Lauderdale that they can depend on.

The Wolfson Law Firm opened its doors in 1963 and have been diligently working for 55 years to ensure that those who've found themselves in an accident can have a chance to fight back. Finding yourself on the wrong end of a legal team can be trouble, especially when the person that is pointing it at you isn't a person at all, but a corporation. They have more money to spend than many of us can spend in our whole lifetimes, and they're more than willing to use it to ensure that they don't have to pay you anything. The Wolfson Law Firm has fought corporations for years, and they're more than ready to do the same for you. Give them a call today at 954-289-5954 to speak to an attorney right away. All consultations are free and we never charge a fee unless we make a recovery for you.

Founded in 1959 and named after its founder Morris Cooper, Cooper City has seen steady growth in population due to expansionist efforts. One such effort was the annexation of Waldrep Dairy Farm which was torn down to construct new homes for coming residents. As of 2010, the census for the city places resident’s total population at just above 25 thousand people. Being a relatively small town, even by Florida standards, Cooper City has little in the way of shopping centers, the few that can be found include:

All of these provide well enough shopping experiences regardless, and they cater to their residents well with shops and services that allow for comfortable living and affordable prices. Finding yourself in an accident in any of these areas can be disastrous though, so taking the time to speak to an attorney over your case will help in getting you the compensation you need.

As stated above, finding yourself in an accident is no laughing matter, and talking to the correct people can see to it that you’re taken care of. Jonah Wolfson and his bilingual team of Fort Lauderdale slip and fall attorneys helping Cooper City victims are just one call away. Getting in contact with them will give you both information and peace of mind that’s keeping you up at night. Call today and speak to a Fort Lauderdale accident attorney right away at 954-289-5954.