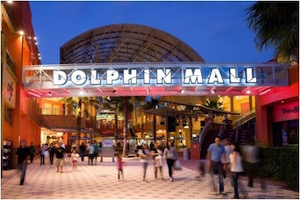 The Dolphin Mall in Sweetwater Florida opened in 2001. It is the second largest mall in Miami. The owners claim that Dolphin Mall attracts over 35 million shoppers annually. That is more than Universal Studios and the Magic Kingdom. But when Dolphin Mall shoppers and customers are injured, the Dolphin Mall Personal Injury Lawyers of the Wolfson Law Firm can help. Simply call the Dolphin Mall Slip and Fall Attorneys at (305) 285-1115 right now.

A group of circus dwarfs from Russia called the “Royal Russian Midgets” were leaving Miami after a show in 1939. As they drove along Tamiami Trail they came across some land advertised as “Sweetwater Groves”. The land had been developed by Clyde H. Anderson, The Russian circus dwarfs decided to buy it and make it their new home..

The “Royal Russian Midgets” had made big plans for the land. They originally wanted to create a tourist attraction on the 100-acre property. However those plans were scrapped after World War II began.

Now Sweetwater, into a small city in western Miami Dade, is a small city in the far western reaches of Miami-Dade County with more than 600 businesses, 14 shopping centers, including the Dolphin Mall, and over 18,000 residents. Over 93 percent of the population is Hispanic. The largest concentration in Sweetwater with the biggest concentration belonging to the Nicaraguan community. The Sweetwater Personal Injury Lawyers at the Wolfson Law Firm have helped people in the Sweetwater neighborhood over the past 55 years.

The Dolphin Mall is located at the western edge of Miami-Dade. It is surrounded by Doral, Tamiami, University Park, Fontainebleau and Flagami. It is located in close proximity to Florida International University (FIU) as well. The mall is located at 11401 NW 12 Street near the Florida Turnpike and the Dolphin Expressway (State Road 836).

The Dolphin Mall is separated into three districts: Moda (Fashion); Rambles (Boulevard); and Playa (Beach). It is widely believed that the Dolphin Mall was opened in response to the popularity of the Sawgrass Mills Mall in Sunrise Florida. The thought was to intercept the traffic from Miami International Airport (MIA) that landed from South America and Europe and would travel to Sawgrass Mills. By placing the Dolphin Mall at the end of the Dolphin Expressway at the intersection with northbound Florida Turnpike and using the same upscale outlet mall design, the Dolphin Mall was successful in developing a vibrant shopping mall.

The stores, shops and dining options at the Dolphin Mall include: 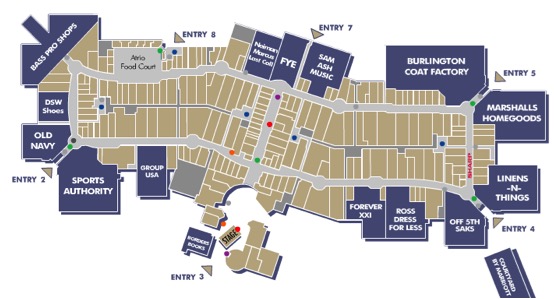 The Dolphin Mall has ample parking lots and garages. It has the usual elevators and escalators you would normally expect at the 2d largest mall in Miami. Unfortunately, sometimes good folks will get injured at the Dolphin Mall and that is when they should call the Dolphin Mall Serious Injury Lawyers in Miami.

If you are injured at the Dolphin Mall do you know what to do after a slip and fall? Our Dolphin Mall Slip and Fall Attorneys in Miami recommend the following:

Like most malls, the Dolphin Mall in Miami and many of its stores, shops, food courts and dining facilities will have closed circuit video surveillance. But if the Dolphin Mall, restaurant or any retail store are not placed on notice immediately, they generally have no legal obligation to keep the video tapes of your slip and fall. When an injured person retains our Dolphin Mall Slip and Fall lawyers we immediately place the mall owner and any potential store operator on notice to preserve and otherwise save the video tapes as evidence.

The Wolfson Law Firm in Miami has humbly represented personal injury victims and the families of wrongful death victims since 1963. For the convenience of our Spanish speaking clients, Jonah Wolfson is a bilingual personal injury attorney in Miami and is available to speak to you now. Our personal injury lawyers in Miami represent people from Miami, Broward, Palm Beach as well as South America, Europe and Asia.