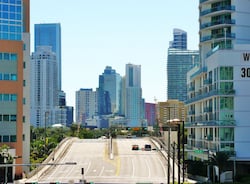 You should call the Brickell Personal Injury Attorneys if you were injured in a:

The Miami Slip and Fall Lawyers at Wolfson & Leon are close by Brickell and can help you and your family. The office is located at 3399 SW Third Avenue in Miami and less than a mile from Brickell. Our Managing Partner Jonah Wolfson is a bilingual personal injury lawyer in Miami. Our Brickell Injury Attorneys have been helping the good people of Miami and throughout Florida for over 55 years. We can help you right now.

You can come to our office or we can come to you. Call now for your free consultation at (305) 285-1115 and let us help you. Your consultation is free and there is no obligation whatsoever. If you hire us, we only get paid if you recover. If you don’t recover for any reason, then you will not owe us a fee.

Brickell Avenue and the Brickell Neighborhood

Brickell is located north of Coconut Grove and south of Downtown Miami. It is defined by a canyon of high rise buildings extending north and south. The following zip codes are assigned to Brickell: 33129, 33130 and 33131.

The Brickell community also has its own sub-neighborhoods within its boundaries. These include West Brickell, South Brickell, the Financial District and the Mary Brickell Village. Many people visit, work and live in Brickell. Some of the office buildings include:

Some of the legendary and beautiful residential towers include:

Everyday someone gets hurt in one of these towers or buildings. The causes of those injuries vary but the result is the same - a good person gets injured and they wonder “Was this my fault?” If you were injured and just don’t know if you have a case then you should call the Brickell Accident Injury Lawyers at Wolfson & Leon and get the answers you need.

Our Miami Slip and Fall Lawyers who serve the people of Brickell can answer your questions for free. Our attorneys can:

Over the last 60 plus years, the Miami Slip and Fall Lawyers of Wolfson & Leon have represented personal injury victims throughout Florida including Miami and Brickell. Our attorneys have also represented people from other South American and European countries including Spain, Colombia, Germany, Venezuela, France, Argentina, England, Brazil, Nicaragua and many other wonderful countries.

Three questions usually come up with our friends from other countries:

Let’s address these one at a time:

If you were injured in a Brickell building, office or restaurant and you just don’t know if you have a personal injury claim, then why not call the Brickell Injury Accident Lawyers at Wolfson & Leon? We can answer your questions for free at any time that is convenient for you.

Our consultations are free. Furthermore, if you don’t recover, we will not charge you a fee. It really makes sense to get the answers you need to make an informed decision. Call us now at (305) 285-1115 to find out more.

Please review our videos, qualifications and recent cases. Once you are comfortable with who we are, let us answer your questions.